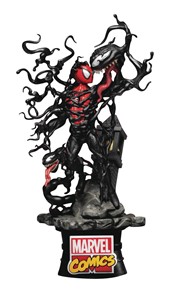 In Venom's first appearance in the original The Amazing Spider-Man comic series, the alien symbiote falls to earth and is in desperate need of a host to connect with for its survival. Once bonded, the new dual life form receives enhanced powers similar to those of Spider-Man! Beast Kingdom is proud to present the latest in the D-Stage range of dream-like dioramas with a classic scene from the comics where Spider-Man is seen in the midst of trying to escape the shackles of the dastardly Venom. Using the loud church bell, which interferes with Venom's powers, the Diorama incorporates a ton of details showing just how strong Venom's grip can be on its host. From the branded base, to the church, Venom, and Spider-Man underneath, no details are spared in creating the ultimate talking piece for Venom fans alike. So make sure to add this diorama to your collection and showcase the ultimate alien power to your friends today!