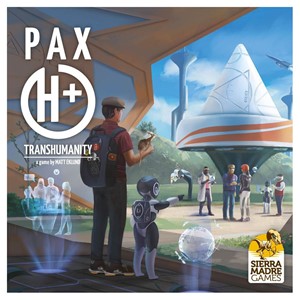 Pax Transhumanity is a game about idea development in a non-dystopian near future. In traditional Pax style, the players have access to a marketplace of ideas to compete over.

Unlike other Pax games, there are no hands or tableaux in the traditional sense. The players’ goal is to invest in viable ideas and use infrastructure to release them to the world. Once an idea is commercialized it becomes part of the human progress splay, becoming part of human history and making other ideas viable. It will also likely generate growth (new cubes), solve humanitarian problems (VP chits), or break down barriers (place company disks).