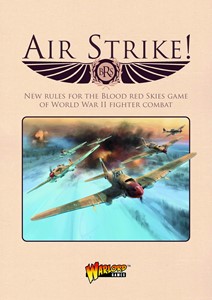 Blood Red Skies: Air Strike! is a rules compendium that presents all of the rules from the original Blood Red Skies starter set and adds many new ones suitable for expanded air operations: ground and sea targets, bombing, strafing and torpedo attacks, defensive flak and terrain. Jet aircraft are introduced with the MiG Alley expansion and there is additional guidance for historic and competitive play.

The book includes seven entirely new scenarios for Blood Red Skies and re-presents the five existing ones to bring them in line with the new rules and player feedback.