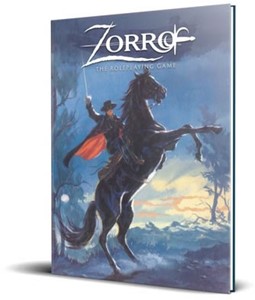 Zorro, the classic swashbuckling freedom fighter and hero, makes his full tabletop roleplaying game debut! Ally with Zorro as you carve your own initials into the fight against evil land and railroad barons, scoundrel soldiers, and those who would abuse and take from the less fortunate! This rulebook brings Zorro to the tabletop in a complete game, powered by the brand new edition of the West End Games classic ruleset: D6 System 2e (developed under license from West End Games).