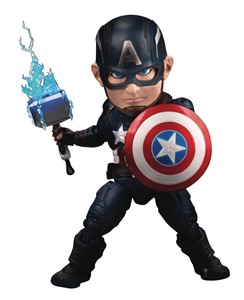 In Avengers Endgame, a battle worn Steve Rogers suits up once again to take the fight to Thanos! Beast Kingdom is proud to introduce the latest in the Egg Attack Action figure series: Avengers: Endgame Captain America! Standing at an impressive 6" tall with 26 points of articulation, the figure comes with an alternate angry face, two head sculpts (masked and unmasked) as well as a spinning Mjolnir, light-up Mjolnir, and two shields! Also included are 3 sets of alternate hands and sculpted transparent effect parts. Collect Captain America and recreate the epic battles of the Avengers!