Icons of the Realms: Eberron - Rising from the Last War Booster Brick (8) 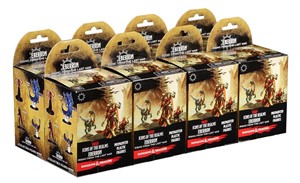 D&D Icons of the Realms: Eberron: Rising From the Last War features a number of exciting races and monsters from Eberron for players to add to their collections. Enter Eberron, a war-torn world filled with magic-fueled technology, airships and lightning trains, where noir-inspired mystery meets swashbuckling adventure. In this set, miniatures representing the new artificer class, along with miniatures of Shifters and Warforged are available for the first time. Other infamous characters from Eberron, including The Lord of Blades also make an appearance!