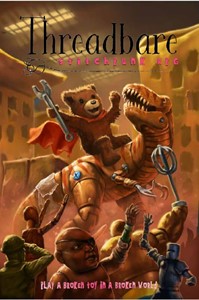 Threadbare RPG is a role-playing game of jury-rigged toys in a broken world. Caught in a world where Entropy is a constant danger, you’ll patch yourself up, invent new devices, and make new friends along the way.

Threadbare is a Powered-by-the-Apocalypse role-playing game by Stephanie Bryant. You’ll need two 6-sided dice and a group of 2-5 friends to play.

Your character starts out as a Softie (soft-filled toy), a Mekka (hard-shelled, plastic or metal toy), or a Sock (a single sock, often thought to have been lost in the laundry).

The rules mechanics are based on the Apocalypse World engine: you roll 2d6 and add your modifiers to determine the direction your story will go.

As you progress in Threadbare, your character changes. Every time you are damaged and repaired, you change your description and even your personality!

Threadbare is a game about making and repairing stuff, and less about killing things. Combat is rare and resolves quickly without use of dice.