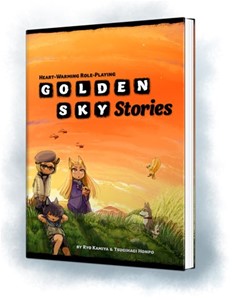 Golden Sky Stories is a heartwarming, non-violent role-playing game from Japan, by Ryo Kamiya. In this game, players take on the role of henge, animals that have just a little bit of magical power, including the ability to temporarily take on human form. You can be a fox, raccoon dog, cat, dog, rabbit, or bird, and each kind has their own special magical powers. Players will then attempt to solve problems around a small enchanted town with ingenuity, co-operation and friendship.