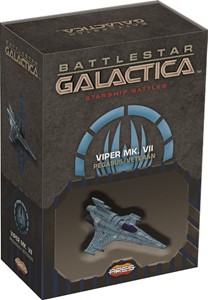 The Viper Mk. VII is a great improvement over the Viper Mk. II, with superior battle capabilities and better flight information for the pilot. After the Cylons infiltrated a fatal backdoor in the Command Navigation Program, most Mk. VIIs have been retrofitted, losing part of their performing features. Isolated from the rest of the fleet, the pilots on board of Battlestar Pegasus have been fighting an exhausting battle against the Cylons, and they started to paint kill marks on their Vipers to keep up the crew morale.

Each Battlestar Galactica Spaceship Pack is a ready–to–play model, painted and assembled.