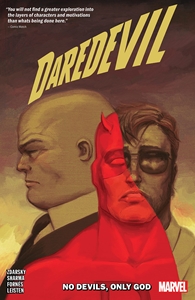 The Man Without Fear is missing! Daredevil has disappeared from Hell's Kitchen - and in his absence, the real devils are starting to come out to play. Detective Cole North may think he's stopped Daredevil, but there are bigger problems coming his way! Meanwhile, Matt Murdock has emerged from his recent ordeals a changed man - but has he changed for better or worse? As he faces up to the choices he has made, Matt grapples with who he is and who he wants to be. Can he truly live a life without the suit? Collecting DAREDEVIL (2019) #6-10. Rated T+