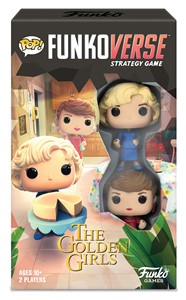 Face off in the ultimate Pop! battle! In the Funkoverse Strategy Game, you combine your favorite characters and go head-to-head in four exciting game scenarios. Use your characters' unique abilities to gain points and achieve victory!

In the Funkoverse Strategy Game - The Golden Girls 100, you'll combine your favorite characters and go head-to-head in four exciting game scenarios. Move through memorable locations like the Golden Girls Home or the Florida Boardwalk and use your characters' unique abilities to capture points and achieve victory! This is a two-character set.