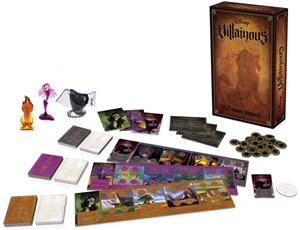 Evil Comes Prepared adds Scar from The Lion King, Ratigan from The Great Mouse Detective, and Yzma from The Emperor's New Groove as new playable characters. Like the previous expansion, Evil Comes Prepared can be played either as a stand-alone game for two to three players or can be used with other Villainous games to include up to six players.