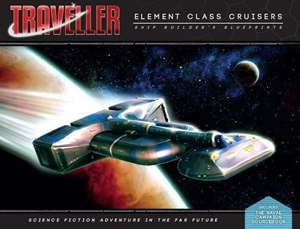 The cruisers of the Imperial Navy are both its symbol and its workhorses. The three classes of ship that make up the Element cruiser family are mainstays of the Imperial Navy, and can be found across Charted Space. From fighting wars and protecting the space lanes, to flag showing missions and voyages of discovery, Element cruisers are true, reliable workhorses of the navy. These huge vessels are equipped with configurable pods, allowing them to be tailored to specific missions, and this box set contains eight such pods, allowing a cruiser to act as a fleet carrier, exploration ship, scout or strike vessel.

This set includes a detailed description of all three Element cruiser classes, the crew who serve aboard them, and the missions they undertake. The ships come alive with the 24 massive blueprint posters (in a variety of electronic formats, allowing you to zoom in on specific details, get a wider view of the entire ship, or print out, allowing players and referees to visualize an entire Imperial capital ship across every deck and weapons bay.

Also included is the Naval Campaigns Handbook, a complete guide to running your own bridge crew campaigns in Traveller. Huge, sweeping campaigns can be created that will take a military ship and its crew through a war, or far out into unexplored space to discover what lies beyond the reach of the Third Imperium.