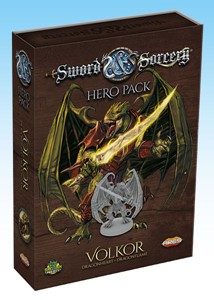 Add a powerful character to your Sword & Sorcery campaign with this Hero Pack! Vokor is a Drakonian guard that was struck by a mystical energy flux from a dying archmage. The wild arcane power tore the guard's mind and body free from Vastaryous' domination and set him on a new path. As a Dragonheart, Volkor left his homeland and now travels across the Talon Coast as a sellsword and healer, feared for his poisonous breath and his ability to wield weapons of monstrous size.

Vokor can be played as either a Dragonheart or a Dragonflame. As a Dragonflame, Volkor wields with equal skill both arcane techniques and fighting weapons. He can control Fire Magic beyond what is normal for his kin, breathing fire almost like a True Dragon! This Hero Pack features two miniatures of Volkor (normal and Ghost Soul form), his Soul Gem, and new cards including two legendary treasures, the deadly Bone Blade and the life-saving Phoenix Down.