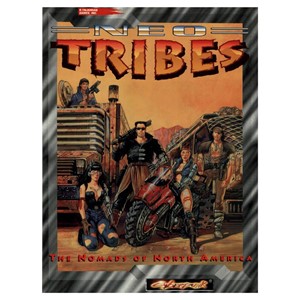 In 2020s America, the urban sprawls that seem to stretch on forever are dwarfed by vast expanses of open country, abandoned after the collapse. Areas once choked with cities and humaity are now home only to lonely ribbons of asphalt, coyotes, jackrabbits ... and the NeoTribes. The NeoTribes -- nomads who have given up life under flourescent light and eating pre-pack, in exchange for starlight and freedom and a life of riding the range, living their own way.

NeoTribes is a complete view of nomad culture in the wilds of post-collapse America. The seven major nations are described in detail including bios, equipment, new roles, vehicles, and background. Plus a nomad's map of America, and an adventure that immerses your players in nomad culture and the Chicago Reconstruction Project.