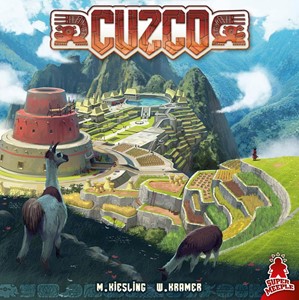 CUZCO is the third installment in the "trilogy of the masks" by the famous designers M. Kiesling and W. Kramer.

This is the new edition of JAVA, which was published in 2000 between TIKAL and MEXICA. "Cuzco" replaces the name "Java." In the game's first edition, the name changed and the setting was moved to the island of Java in Indonesia. It seemed logical to put back into play with its original name desired by the authors and to put it back among the other peoples of ancient South America!

You are Inca dignitaries, fighting for political supremacy in the Andes. You must exploit the new, still virgin territory of Morray, north of Cuzco, a vast region of forests and mountains, to find the new bases of your civilization. You must irrigate the soil and plant innovative food crops in circular terraces. Build Villages, then transform them into Cities by building Temples. Then expand the Temples and organize a grand festival in honor of the Sun God.