Magic the Gathering CCG: War of the Spark Booster Pack 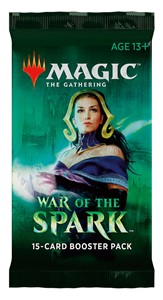 Among those who stand in the way of Nicol Bolas’s terrifying machinations are the Gatewatch, Planeswalkers sworn to defeat evil, no matter where it’s found. But as they work to unite the other mages and mount a defense of Ravnica and its people, the terrifying truth of Bolas’s plan becomes clear. The Elder Dragon has prepared a trap to ensnare the most powerful mages from across the Multiverse—and it’s too late to escape. The ultimate battle starts soon. Be there when it ends.