Starfinder Adventure Path: Attack of the Swarm! 1 - Fate of the Fifth 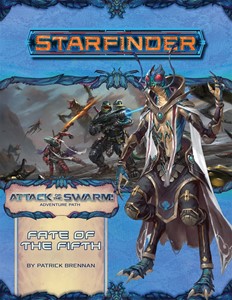 As the insectoid alien Swarm surges across another system in the Vast, the heroes are the only survivors of a doomed military battalion. After retreating through several miles of war-torn terrain to a fortified command post, they receive orders to evacuate the planet and rescue any civilians along the way. Among the refugees is a shirren priest of the Forever Queen Hylax, a mysterious ancient insect-goddess whose temple seems to be of particular interest to the Swarm. By relying on their wits—and each other—the heroes just might make it into orbit before the Swarm completely overruns their world.

Fate of the Fifth is a Starfinder Roleplaying Game adventure for four 1st-level characters. This adventure begins the Attack of the Swarm! Adventure Path, a six-part, monthly campaign in which the heroes fight back against a ruthless and nigh-unstoppable alien invasion. This adventure also includes a player's guide to battling the Swarm, an exploration of the Swarm's origins and biology, and a selection of new Swarm monsters and other terrible threats.