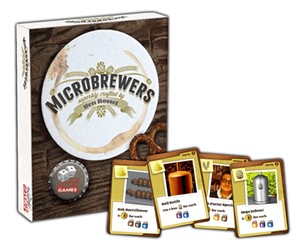 First, this adds two new card types: The Research Lab and the Tasting Room. The Research Lab encourages you to brew specialty beers that use fruit and coffee and balances out the number of worker and equipment cards in the game. The Tasting Room scores you end-game points for having a variety of different ingredients showing on your brewery upgrades. Adding these two new card types means you’ll see a greater variety of cards in your hand, making the decision about which card to play on each turn more interesting.

Second, instead of passing being the third option for the main action of your turn, you now have the option to draw 1 additional card, meaning you can add 3 cards to your hand on your turn instead of 2. This can be crucial late in the game, giving you the 1 additional card you need to make an epic brew or install a critical brewery upgrade on your last turn.

Third, the game lasts one additional round. Now, when the game's end is triggered, players finish the final round and play one more full round. This provides a more satisfying feeling of completion. It allows you to better plan for the end of the game and avoids the game ending abruptly without giving you the chance to take a final turn.