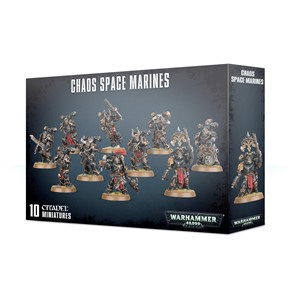 The new Chaos Space Marines set builds you a squad of ten of these superhuman reavers, realized in baroque and terrifying splendor. Just as awesome-looking as the models from Warhammer 40,000: Shadowspear and Warhammer Quest: Blackstone Fortress, these models have been made with customization in mind, allowing you to build units of close-combat raiders, long-ranged fire teams and anything in between. If you’re looking to field smaller squads, there are enough parts inside to build two units of five, each with a special or heavy weapon, Chaos Icon, and appropriately sinister-looking Aspiring Champion.