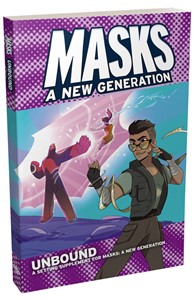 Unbound is a supplement for Masks: A New Generation, a tabletop roleplaying game in which you play young superheroes in a city with a multigenerational history of superheroic deeds, crises, and champions.

This supplement details new playbooks and playsets for Masks: A New Generation, including:

Masks: A New Generation make use of the same rules-light engine as Apocalypse World, Monsterhearts, Urban Shadows, and Epyllion to create stories about young superheroes in the vein of Young Justice, Young Avengers, and Teen Titans. Unbound opens up the world of Masks to new “What If...” stories that take players to the far reaches of the cosmos, the dark streets of a crime-ridden metropolis, the most famous school in Halcyon City’s history, or the fledgling rebellion against alien oppressors.