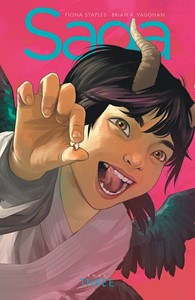 At long last, it's finally time for the THIRD massive hardcover collection of SAGA, the critically acclaimed sci-fi/fantasy series from the multiple Eisner Award-winning team of artist FIONA STAPLES and writer BRIAN K. VAUGHAN. Collecting 18 of the most shocking and impactful issue from the epic tale of Hazel and her star-crossed parents, this deluxe edition features a striking, all-new original cover from FIONA STAPLES, as well as exclusive, never-before-seen extras. Collects SAGA #37-54.