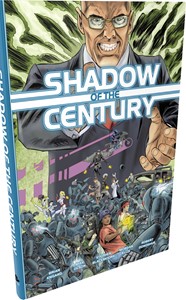 Enter a world of 1980s action adventure with Shadow of the Century, a robust setting and supplement for Fate Core.

The year is 1984, and the Shadows run the world. The Century Club has been disbanded, the Spirits of yesteryear driven underground—only to rise up alongside new wave heroes to stick it to the man!

Fight the good fight in a gonzo game of underdog heroes set against the forces of oppression everywhere. Join kung fu masters, computer hackers, maverick cops, and more to right wrongs and prevent the darkest Shadows from ending reality as we know it.