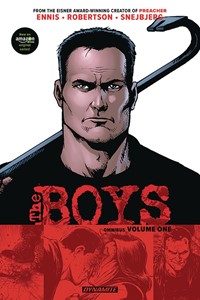 Written by Garth Ennis; illustrated by Darick Robertson and others

Billy Butcher, Wee Hughie, Mother's Milk, The Frenchman, and The Female are The Boys: A CIA-backed team of very dangerous people, each one dedicated to the struggle against the most dangerous force on Earth - superpower! Some superheroes have to be watched. Some have to be controlled. And some of them - sometimes - need to be taken out of the picture. That's when you call in The Boys! After the opening story arc introducing Hughie to the team (issues 1-6), Dark avenger Tek-Knight and his ex-partner Swingwing are in trouble (issues 7-14). Big trouble. One has lost control of his terrifyingly overactive sex-drive, and the other might just be a murderer. It's up to Hughie and Butcher to work out which is which, in Get Some. Then, in Glorious Five-Year Plan, The Boys travel to Russia - where their corporate opponents are working with the mob, in a super-conspiracy that threatens to spiral lethally out of control. Good thing our heroes have Love Sausage on their side.