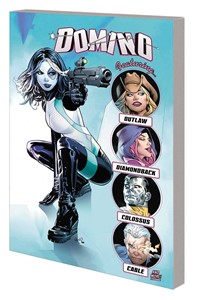 Written by Gail Simone and others; illustrated by David Baldeon and others

Domino has a dangerous new mission! Pale skin, black hair, skintight bodysuit - no, we're not still describing Domino...here comes Morbius, the Living Vampire! But who is preying on whom? Domino's luck seems to have a mind of its own sometimes, whether her intentions are noble or not. So perhaps a very special guest could give her a refresher course on luck-based powers? And maybe join her on a little trip to the Mojoverse? We know, it's a real long shot. Plus: At last, the origin of Domino's posse, Outlaw and Diamondback! The first appearance of the strange group known as the RejeX! And will Domino rekindle her brief romance with Colossus? Collecting DOMINO (2018) #7-10 and ANNUAL #1. Parental Advisory