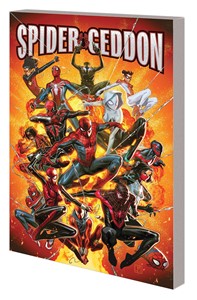 Written by Christos Gage and others; illustrated by Clayton Crain and others

SPIDER-VERSE united every Spider-Person ever - now SPIDER-GEDDON will destroy them all! The Inheritors have escaped their radioactive prison planet and made their way to the Marvel Universe. As the villains draw first blood, a whole Spider-Army must reunite to keep them at bay! Starring Spider-Man, Otto Octavius, Spider-Gwen, Miles Morales, Spider-Woman, Spider-Punk, the live-action Japanese TV Spider-Man, the Spider-Man from the new PS4 video game and many more Spiders - including some brand-new ones! Prepare to meet Web-Slinger, Spidey of the Wild West! May Parker: Spider-Ma'am! And more! But as the threat they face builds, things do not look good for our web-heads and wall-crawlers. The end of the Spider-Verse is here! Collecting SPIDER-GEDDON #0-5 and VAULT OF SPIDERS #1-2. Rated T