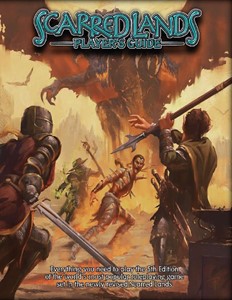 Drawing enthusiastically on Greek mythology, the revised and re-imagined Scarred Lands retains its place as a modern fantasy RPG setting. This is a world shaped by gods and monsters, and only the greatest of heroes can expect to be counted among them. In the Scarred Lands Players Guide, players build a character to adventure on the most populous continent of Scarn, Ghelspad, which plays host to vast unexplored regions, hides unsolved riddles from ancient cultures, and taunts adventures with the promise of undiscovered riches hidden among the ruins of older civilizations. This supplement requires use of the Players Handbook for Dungeons and Dragons Fifth Edition, and is compatible with D&D 5E rules.