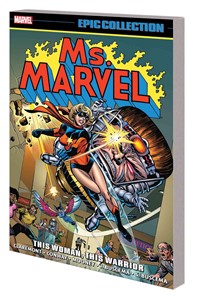 Written by Chris Claremont and others; illustrated by Jim Mooney and others

Before she was Captain Marvel, she was Ms. Marvel! NASA Security Chief Carol Danvers' life had long been intertwined with the alien Kree and their Earthbound soldier Mar-Vell, and soon she gained incredible powers of her own - and a colorful persona to go with it! Now, as editor of Woman magazine, Danvers must contend with Marvel's biggest blowhard, J. Jonah Jameson, while coming to terms with her brand-new life as a super hero! As Ms. Marvel, Carol faces down threats including the Scorpion, the Doomsday Man, Grotesk and M.O.D.O.K. - but her deadliest foe of all may be the dynamic Deathbird! Plus: Ms. Marvel fights alongside Spider-Man in battle with the Super-Skrull! And will she join the dynamic Defenders? Relive the early days of your favorite hero! Collecting MS. MARVEL (1977) #1-14, MARVEL TEAM-UP (1972) #61-62 and DEFENDERS (1972) #57. Rated T