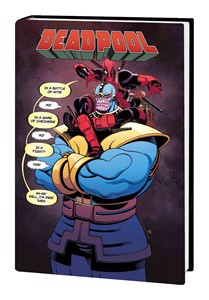 The Minibus rides again! When SECRET WARS reshapes the cosmos, Shiklah and her groovy ghoulies take center stage in a world without Wade Wilson! Then, the Merc returns for a pair of showdowns with the Mad Titan and the Ragin' Cajun! Can Deadpool win in a deadly love triangle with Thanos? And will he survive one last job with his longtime con-job partner Gambit? Best frenemies Deadpool and Cable rub shoulders and trade bullets once more when Nathan is tasked with keeping one man alive - the same guy Wade has been hired to take out! And when Forbush Man is murdered, can Deadpool stop a serial killer from offing all of Marvel's funniest characters? Collecting MRS. DEADPOOL AND THE HOWLING COMMANDOS #1-4, DEADPOOL VS. THANOS #1-4, DEADPOOL & CABLE: SPLIT SECOND #1-3, DEADPOOL V GAMBIT #1-5 and DEADPOOL: TOO SOON? #1-4. Parental Advisory