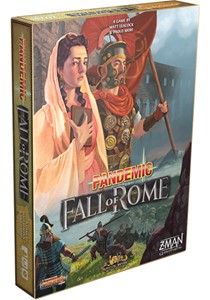 At the height of its power, the Roman Empire covered a vast amount of territory and brought major advancements in engineering, architecture, science, art, and literature. Corruption and economic crisis has made the empire unstable and paved the way for aggressive barbarian tribes to attack. Now citizens, soldiers, and allies of Rome must unite to protect the empire in Pandemic: Fall of Rome! Raise armies, defend your cities, and forge alliances to ward off the relentless incursions. Can you hold the line against the invading hordes and prevent the fall of Rome?