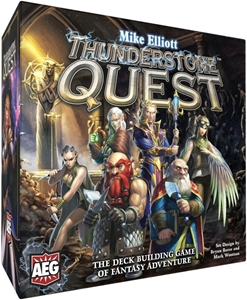 Thunderstone Quest is the third version of AEG’s Deckbuilding game of heroic adventure! It was successfully Kickstarted in May of 2017 and delivered to backers in March of 2018. In July of 2018 it returns to Kickstarter and in the fourth quarter of 2018 the game will be released into traditional retail stores.

In Thunderstone Quest players assemble a party of adventurers and venture into the Dungeon where they’ll confront and defeat monsters to gain treasure and experience. They’ll find mysterious keys that unlock The Guardian and when the Guardian appears they’ll try to inflict as much damage as possible and win the game!

The major innovation for Thunderstone Quest is ... Quests! Each Quest consists of a selection of dungeon tiles and monster cards that create an engaging storyline. Each Quest includes rules for selecting Village and Dungeon cards to create a variety of Adventures. After you've mastered each Quest you use random setups of Quest cards to create new Dungeons and Villages - build your own Quests and Adventures!

The Thunderstone Base Game includes the base game components and 2 Quests. (Q1: A Mirror in the Dark and Q3: Risen from the Mire).