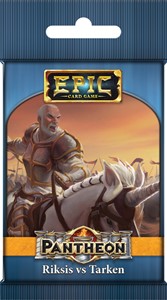 Play as a god in the Epic Pantheon! Each pack contains a rules sheet, 2 deity cards, a token card and 12 game cards for use with Epic Card Game. One of each pack is recommended for casual players, while advanced players will want three of each pack for a complete constructed collection. Epic Pantheon consists of a total of six packs of dueling gods, released two at a time.