Icons of the Realms: Waterdeep - Dungeon of the Mad Mage Booster Brick (8) 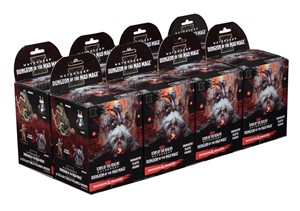 In the city of Waterdeep rests a tavern called the Yawning Portal, named after the gaping pit in its common room. At the bottom of this crumbling shaft is a labyrinthine dungeon known as Undermountain, domain of the mad wizard Halaster Blackcloak who has seeded his lair with monsters, traps, and mysteries.