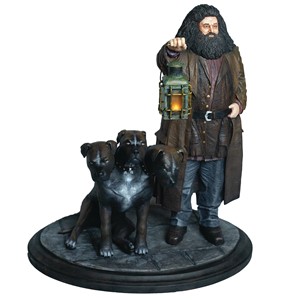 Hagrid, the half-giant, has a predilection for pets that many might consider dangerous and Fluffy, a fearsome 3 headed dog, is one such hound! In the film adaptation of Harry Potter & The Philosopher's Stone, we learn that Hagrid buys Fluffy 'from an Irish fella' in the Leaky Cauldron. With this statue, we wanted to recreate the moment Hagrid made his way home with the latest addition to his ever-expanding menagerie.

The statue captures Fluffy in his much smaller puppy state, before he matured to his enormous adult size. Hagrid is holding his lantern aloft to guide the way back to Hogwarts in the dark of night. Fluffy is portrayed sitting at his master's feet, each of his three heads conveying a different expression, no doubt eager to curl up in front of a roaring fire, or perhaps listen to some soothing music. We understand he's partial to the harp. Hagrid stands 10" tall and is standing on a flagstone effect base. His lantern is powered by 2 x LR44 batteries, not included.