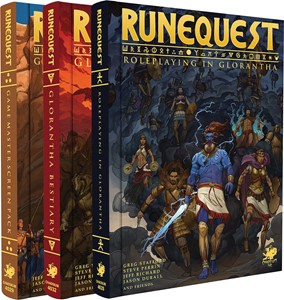 This beautiful collector's slipcase set contains the core rule book for RuneQuest: Roleplaying in Glorantha, the Glorantha Bestiary, and the Gamemasters Screen Pack. With these three products in this deluxe package, the gamemaster has everything required to run RuneQuest games set in Glorantha.

The RuneQuest Glorantha Bestiary includes almost 200 monsters, creatures, spirits, demons, elementals, Elder Races, and more, both new and drawn from the RuneQuest and Gloranthas incredible history and wealth of prior publications, all updated to be compatible with the new rules.

The RuneQuest Gamemaster's Screen Pack is a magnificent landscape, four-panel, sturdy gamemaster resource bearing an image of the incredible Gods Wall on the player-facing side, and invaluable reference tables, charts, and rules summary for the gamemasters use. Packaged with this table are reference sheets, preprinted blank adventurer sheets, pre-generated adventurers, three full-color maps, and an Adventures book containing a guide to the hamlet of Apple Lane and three adventures set in the region, suitable for new or experienced players alike.