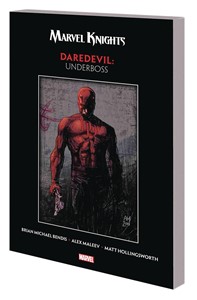 The mystery man named Mr. Silke has inspired Wilson Fisk's lieutenants to rise up and take down the Kingpin of Crime! But what is the connection between Silke's coup and the contract on attorney Matt Murdock's life? And what role did Fisk's wife and son play in this underboss uprising? Meanwhile, when Matt dons his crimson costume to fight crime in Hell's Kitchen, what toll does that take on the man beneath the mask? Is the Man Without Fear becoming a man without mercy? Creative dream team Brian Michael Bendis and Alex Maleev take Daredevil in a bold new direction! Collecting DAREDEVIL (1998) #26-31.