Dungeons and Dragons: Into the Deep Dark 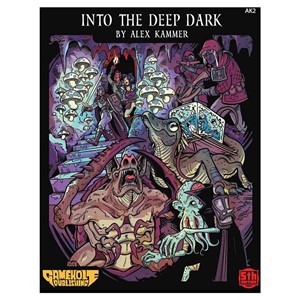 The normally quiet town of Ockney's hold finds itself in disarray as a result of a vast criminal conspiracy. When Baron Reison, the head of state, began to act erratically and destructively, a group of brave adventurers was hired to get to the bottom of the trouble. After a garrowing investigation, the adventurers confronted the terrible brain gorger, Marlipp, and were successful in forcing him to flee from his lain in a copper hills mine and into the deep dark. But though the characters were victorious, Marlipp's threat did not end. Now the adventurers are charged with destroying him utterly; but what they don't know is that there are other even more powerful forces at play. Will these brave heroes be able to hunt down the foul Marlipp while navigating the perils of the deep dark? And how will they fare in negotiation with the other unknown and extremely dangerous forces at work in the underworld, many of which seek their doom?