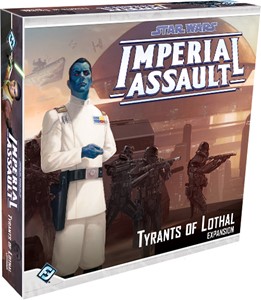 Tyrants of Lothal introduces new heroes, enemies, allies, map tiles and a six-part mini-campaign for Imperial Assault, the strategy game of epic missions and thrilling combat. These components bring the planet of Lothal to life and give you the oppurtunity to join the burgeoning Rebel Alliance. Whether it's in a campaign or skirmish game, the fate of the Rebellion rests on your shoulders...but you're not alone. Join the crew of the Ghost from Star Wars Rebels in your epic fight against Grand Admiral Thrawn, your dealings with the shifty pirate Hondo Ohnaka, and your mission to take down the tyrants of Lothal!