Terminator: Genisys Board Game - Rise of the Resistance 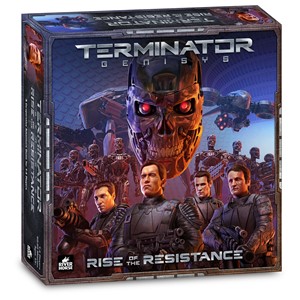 Set in 2029, Rise of the Resistance is a four-player cooperative adventure, where you play as the remaining forces of humanity battling against the near unstoppable forces of SkyNet. The game features loads of highly, detailed miniatures, including your favorite heroes and their robotic counterparts. With a variety of interlocking tiles that form the game board, as well as a series of missions that string together to create a major story-driven campaign, players will struggle to outsmart the most powerful artificial intelligence in history, all in a desperate scramble for survival.

Join Kyle Reese and John Connor fighting for the future of mankind. Players will do everything from rescuing prisoners to dealing with infiltrators, from gathering weapons and supplies to taking part in the final assault against SkyNet's secret weapon, The Time Machine.