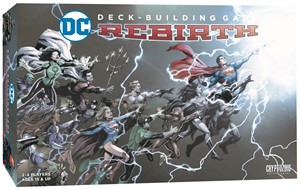 Compete for bragging rights against your fellow Super Heroes or work together as a team to defeat the Super-Villains before the Threat Meter maxes out. That's right: The game features both competitive and cooperative modes right from the start! Either way you play, Villains don't go into your deck when defeated, but instead grant a one-time Reward. In competitive play, Villains you defeat still earn you Victory Points and they go under your Super Hero. You can even use them to bribe your rivals for various favors!