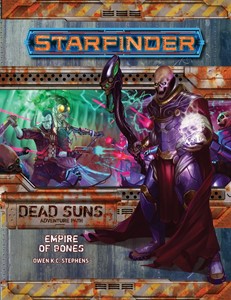 Empire of Bones (Chapter 6): The undead Corpse Fleet has appeared in orbit above the Gate of Twelve Suns, intent on seizing the ancient alien superweapon called the Stellar Degenerator. Massively outgunned, the heroes' only hope lies in infiltrating the fleet's flagship and seizing control of the vessel's bridge. Only then can the heroes set the ship to self-destruct and pilot it on a collision course with the superweapon. If successful, the heroes can destroy the Stellar Degenerator, but they'll need to escape the destruction to live to tell the tale!