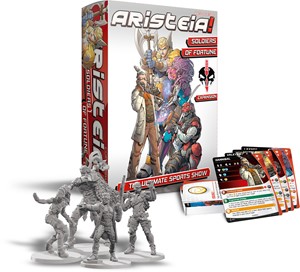 Hannibal, the cunning mercenary leader, has assembled an elite team to participate in the most spectacular and, above all, profitable show in the Human Sphere. With his unparalleled ability to control the tactical situation in the HexaDome, he’ll be able to adapt and rise victorious against any enemy.

Valkyrie, Hannibal’s impressive bodyguard, has proved herself more than capable to face HexaDome veterans the size of Maximus. Her terrifying battle cry can freeze the bravest hearts, and no one is safe when she wields her halberd.

Laxmee, the unpredictable Masai hacker, will show new ways to use combat protocols with her military grade hacker device. Summoning programs like Masai Laibons summon the rain, she can both help her teammates or hinder her opponents.

Señor Massacre, the incorrigible masked luchador, has overflown all audiometers with his irreverent loquacity and his spectacular fighting style. His enemies learn the bad way that his tongue is sharper than his katanas.

The two new States this expansion adds to the game allow new strategies in the HexaDome. Stunned enemies will lose successes in their rolls, while Focused allies will be able to increase their rolls to improve their chances of success.

Aristeia! plastic miniatures arrive unpainted and may require some assembly.