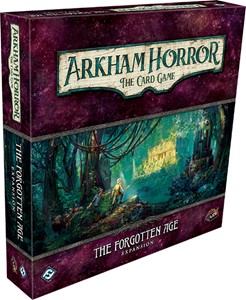 Join the expedition in The Forgotten Age deluxe expansion for Arkham Horror: The Card Game! Five new investigators explore dark rainforests and forbidden caverns in search of an ancient Aztec temple, but the truths they uncover could undo our entire understanding of the universe. Will you make the discovery of the lifetime, or will you become lost in time?

In The Forgotten Age, one to four players embark on a scientific expedition to the rainforests of southern Mexico with five new investigators, as well as an incredible eighty-seven scenario cards and sixty-four player cards (two copies each of thirty-two distinct cards). Here, you and your team will venture deep into dark rainforests and forbidden caverns in two new scenarios, which form the beginning of a new campaign for your investigation team as you step back into The Forgotten Age.