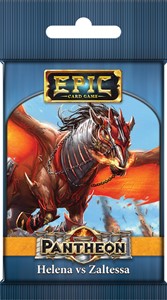 Play as Helena, the Valiant or Zaltessa, the Huntress! Zaltessa hunts everything under the Four Skies, even other gods. However, one is valiant enough to hunt the Huntress. Are Helena's courageous tactics enough to combat Zaltessa's lust for challenge?