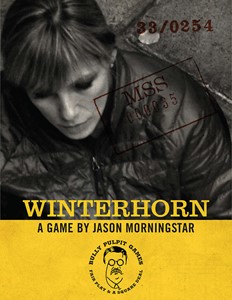 WINTERHORN is a live action game for 5-8 players about how governments degrade and destroy activist groups. By playing law enforcement and intelligence operatives working diligently to demoralize and derail, you’ll learn about the techniques used in the real world in pursuit of these goals. By playing WINTERHORN you’ll have a chance to reflect on weak points in your own activism, and think about ways to harden organizations you care about against government intrusion.

WINTERHORN: the code name of a small but passionate group of “peace and justice” activists. On the surface they project innocent, if misguided, zeal, but you know better. You’ve dealt with groups like this before, and there’s always a dangerous core. Gun-runners. Bomb-makers. People who deserve to be thrown in a dark hole somewhere.

As government agents, your goal is to nudge them into destroying themselves, using every trick in the book – black bag jobs, disinformation, spinning up rival front groups, and even escalating to vandalism and violence when necessary. Your mission, with the full force of the government behind you and time running out, is to get WINTERHORN’s members fighting like rats in a bucket. They need to fall apart before they can hurt anyone, and the state’s hands need to stay clean.

They won’t know what hit them.