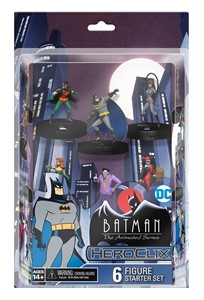 This Starter Set features the namesake of the set, Batman, as well as his always trusty sidekick, Robin, both ready to take down crime in Gotham! Their malevolent counterparts include Catwoman, Harley Quinn, Poison Ivy, and the ever-sinister Joker!

Along with these six fantastic figures, this Starter Set includes everything a player needs to learn and start playing HeroClix today! From the figures, to a HeroClix Rulebook, two double-sided Maps, a Powers and Abilities Card (PAC), Object Tokens, Terrain Tokens, Dice, and Character Cards. Get this unbelievable Starter Set today to start playing HeroClix or bolster your ever-growing collection!