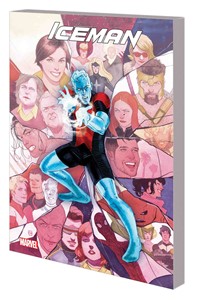 The Champions reassembled! Iceman reunites with Angel, Hercules, Ghost Rider and Darkstar, but will even they be enough to protect Los Angeles from a swarm of rogue, haywire Sentinels? All eyes are on Bobby - how will he fare as a leader? And as if that's not enough, Iceman and his younger counterpart must team up - to face their parents! The Drakes have discovered the existence of the time-torn teen, but what are their true motives for engineering a meeting? And as Bobby looks to make his move to the City of Angels permanent, Daken resurfaces - with big plans for Iceman and the X-Mansion! Why has the son of Wolverine been training Bobby's former student? Whatever the answer, it's bad news for the X-Men. Iceman to the rescue! Collecting ICEMAN (2017) #6-11.