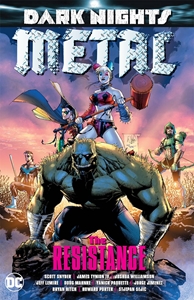 In this DARK NIGHTS: METAL tie-in, the Justice League has scattered around the world to find artifacts that can stand against the invasion of the Dark Multiverse. Plus, an S.O.S. from Dick Grayson sends Robin back to Gotham City to find Batgirl, Harley Quinn, Killer Croc, Black Canary and Green Arrow trapped in a labyrinth of madness and death! Collects TEEN TITANS #12, NIGHTWING #29, SUICIDE SQUAD #26, GREEN ARROW #32, BATMAN: LOST #1, THE FLASH #33, HAL JORDAN AND THE GREEN LANTERN CORPS #32, JUSTICE LEAGUE #32-33 and HAWKMAN: FOUND #1.