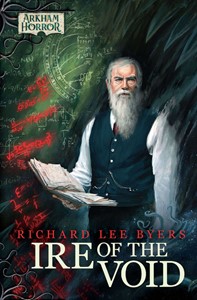 How could six stars vanish from sight all at once, never to reappear? Norman Withers has, perhaps, made the greatest scientific discovery in the history of Miskatonic University, one that could earn him prestige and international fame. There's only one problem - nobody believes him. So, when a young student of Albert Einstein, himself, comes to Arkham, Norman seizes the chance to prove his discovery to the world. But, when the physicist mysteriously goes missing, Norman finds himself in a desperate fight against time and the creatures that defy scientific explanation.

In Ire of the Void, a thrilling novella by Richard Lee Byers, players can take on the role of the investigator with detailed, full-color inserts of Norman Withers' gathered evidence, complete with the astronomer's notes. In addition to a hardcover copy of the book, Ire of the Void includes four promotional cards to allow readers to build a deck for Norman Withers in Arkham Horror: The Card Game.