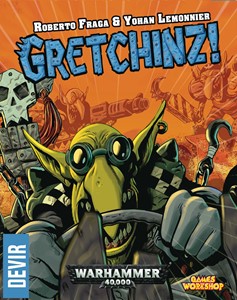 The greenskin's passion for speed and violence is known throughout the galaxy. It is not uncommon to see (from a reasonably safe distance of course) little crowds of Orks from different klans take any excuse to launch their best Gretchinz into insane races where they pilot buggies which have been slapped together with whatever is at hand. There is no need to point out that firepower and speed are far more important than the safety of the racers when it comes to the design of such contraptions.

Now you too can recreate these frantic races, pitting these crazy speed freaks against each other. Play your cards cunningly and try to manage your attacks and movements intelligently, before your rivals have a chance to get ahead. Come on, you must finish them!

Gretchinz! is a crazy racing game for 2 to 4 players (which can be expanded to up to 8 players with a second copy of the game). Players will be rolling their dice all at the same time. Dice indicate the type of actions that players can perform: move, attach, draw new cards, etc. The fist player to align the dice to his interest will yell Waaagh! and everybody else need to make do with the results they have on the table at that moment. Regarding attacks, players wont know for sure if the cards they have at hand are good enough for their intended action. Players hold the cards in their hand in such a way that they will not be able to see the relevant side of their hands (while the rest of the players can actually see the fire power of the rest of the opponents).